Harlow Arthritis Support Trust for Everyone

We are welcoming different organizations and community groups as you can see from this guest post written by one of our amazing volunteers.

‘Just for a change the weather forecast was good with the possibility of some light showers towards the end of the afternoon, for the day-trip up river as far as David and Victoria Beckham’s house, beyond Harlow Mill.

The group had obviously heard about the possibility of late afternoon rain as they arrived half an hour early and keen to get started. For the Harlow Arthritis Support Trust for Everyone’s (HASTE) first ever organised outing they had chosen a canal boat day trip and they were determined it was going to be enjoyable.

At Latton Bush lock the first volunteers of the day helped to change the locks. They took a bit of persuasion, but once Brenda showed the way there was no stopping them. It certainly made it an easy trip for the crew, who just sat back and took photographs (as you can see.) 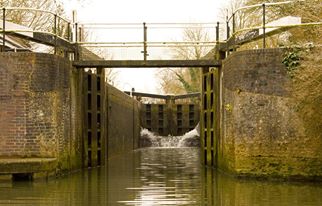 It was a little quieter when the group where eating their lunch. But afterwards there was a chance for those who wanted, to have a go at steering the canal boat. Geoff dropped the engine revs but they were soon up again as one after another would-be skippers showed how adept they were at steering. Future skipper volunteers?

Turning just before Feakes Lock the group decided it was time to start what they had really come on the trip for. To practice their song and dance routines they had been working out for Betty’s 90th birthday celebrations. She was on the other boat and I wonder what she thought about all the work that went into the planning.

The river slipped quietly by but the same could not be said for the ‘big show’ hits sung by the group and led by Brenda and Sue. At one point even practicing their dance routine. Is this a first for the CanalAbility? Certainly the very experienced skipper thought so.

The rain started to fall as we made our way to the Moorhen moorings with plans being made for future outings and talks about the day out. Their first outing had been a great success and I am sure with the drive and enthusiasm of the group it wont be long before another outing is organised.

So thank you from the CanalAbility skippers and crew to HASTE for a most enjoyable and ‘entertaining’ day out. Do you do repeat performances? Oh, and thank you for the food it was most welcome!’

This site uses Akismet to reduce spam. Learn how your comment data is processed.

GET NEWS AND UPDATES

We respect your privacy and
take protecting it seriously